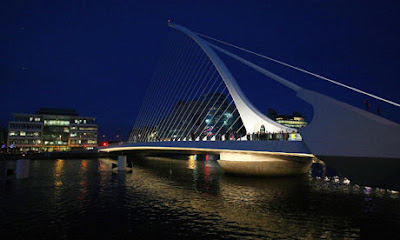 Does anyone else find this more than a little weird ?

The iconic structure stretches 120 metres across the capital’s River Liffey from Guild Street on the northside to Sir John Rogerson’s Quay on the southside.

Designed by Spanish architect Santiago Calatrava, the bridge takes the shape of the Irish harp with cable-stay ‘strings’.

Ms Murphy said her uncle would have been amazed by the 40 million euro creation.

“He was a very, very unassuming man and I think he would have been quite overcome.

“I can see the tears in his eyes now — he probably wouldn’t have turned up to the opening but I think he would be very, very overcome by emotion,” she said.

“It’s wonderful that Seamus Heaney came and I’m quite amazed that there are so many people here.

“I thought there would have been only a sprinkling of people in the know but I think Dublin has taken this bridge to its heart.” [Read More]