NPR tonight had a report on the International Appalachian Trail. The Appalachian's formed some 350 million years ago when the Americas, Eurasia and Africa formed Pangea, before the continental plates split forming separate land masses divided by the Atlantic Ocean.

Dick Anderson has been promoting an international trail, from Georgia to Newfoundland, then Scotland, Portugal, Spain and finally, Morocco--reuniting this original single mountain range... and in my mind, I thought... knitting these continents and all their peoples together again.

I want to do it! The whole way. And write poems as I go. Poems to knit the continents back together.

If I were a wealthy man, this would be no problem. But even better not being able to pay my way. Patrons... will be a part of the adventure. And I'll want hiking companions. Maybe a tag-team of companions.

I want to do this. I'm serious. And when I set my mind on doing something, I don't rest until it's a reality.
My age, and the injuries from being hit by a car all make it more interesting (ok... more 'newsworthy'... human interest... money in it for others to milk)  and for me... more of a challenge.

Will need to organize a means of making contributions--set up a foundation perhaps. Get a publisher on board.

The old dog's still barking and ready to go!

Who will be my first patron?

New to me...a FREE submission manager for poets and writers. If like me, you have 20 to 35 submissions out at time, check this out. Not going to trash my card file and log book, but I spent the whole day entering data--and find it very useful. Stats on return times, a good search feature for publications. 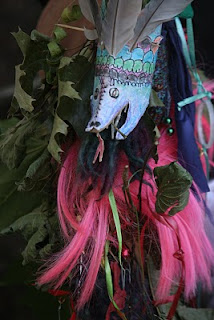 People stop me on the street. What is this? they ask.

No one name will do--no more than for any work of art. If we say with Levi Bryant*, that an object is always more and other than its manifestations, that the being of an object is always withdrawn, a work of art differs from other objects in announcing its withdrawal as we encounter it. There can never be an answer to the question--whether asked in general or of a particular work: what is art? what is a poem?

I call this my Spirit Stick. Though I mean nothing supernatural by it, it leaves open what it is as most people have no set idea of  what 'spirit' might mean in this context. People I'm likely to encounter on the streets of Philadelphia are more apt to have fixed ideas about art--or to use the label to replace the experience, to shut if off. Better to know that you don't know. It's precisely this openness that makes a difference, awakens our mind to question what we have encountered, and is the source of its power.

... being only a sample of Bryant's developing ideas on Larval Subjects. I have found the source of many poems in my free translations of Bryant's ideas.
Posted by Jacob Russell at 6/19/2010 01:10:00 PM No comments:

Surprising, given his rhetorical skills.


Discontent with Obama’s handling of the oil spill revolves not so much with how he’s dealing with the spill itself– though there’s plenty to be discontent with there as well –but with his failure to seize this opportunity...
The BP oil disaster is not simply an ecological and economic catastrophe, but is a symptom or a symbol of all the failures of neoliberal ideology. And this is precisely what has been largely missing in Obama’s handling of the issue. What we need right now is not someone who seeks bipartisan legislation, nor someone who works quietly and competently behind the scenes. No, what we need right now is a Lacanian master.

Perhaps the best way to understand Lacan’s discourse of the master is in terms of the moment of kairos in rhetoric. In Greek, kairos means the “right or opportune moment.” The rhetor is the person who is adept at taking advantage of the opportune moment to generate action that leads in the right direction. ...

It is precisely something like this that is the case with the BP oil catastrophe. The oil catastrophe echoes and resonates not only with past oil catastrophes, but with the financial collapse, the West Virginia mining disaster, the exploitation of American tax payer dollars by contractors in Iraq and Afghanistan, the exploitation of American citizens by insurance companies, and on and on. If there were ever a moment to quilt together our economic woes, the impending environmental apocalypse, and rampant corruption among the corporations and government as a result of neoliberal ideology, this is that moment. Obama needs to step up to the plate and take advantage of this moment, performing a Kennedyesque moment not unlike that of persuading the American people to go to the moon.

The point isn’t that Obama will necessarily be successful in all that he asks for, but that asking for it plays an important function in structuring the dialogue and changing popular consensus as to what the function of government is and whether or not corporations truly are the best at running things. Now is the time to ask for big things...

Lorin Niedecker over the Delaware

Death of a Musician

lying on the sidewalk of a busy street a woman        a paramedic is working on her       gift of breath to the dead passersby stand in a circle frozen transfixed        the victim's shabby rags her filth the bundle of blankets on the walk the cardboard box where not long before she lay asleep a rosewood recorder with an ivory handle clutched in her fist        watch as one the crowd, bound by curiosity and wonder

You hoped for her revival?

No. Not like that... that's the thing... more like a simple wish to follow a story to its end not wanting to let go till it was over and yet... almost indifferent to its outcome how else explain how someone who has not existed for anyone--maybe not even for herself no longer part of the world inhabited by those now keeping vigil invisible until that moment should--at the hour of her death become in all her strangeness--a presence?
Posted by Jacob Russell at 6/09/2010 03:35:00 PM No comments:


The fan makes a sound which several words approximate but none quite capture -- give up -- the hell with it and write...

and it is -- for me naked and sweaty on my bedroll -- not for you -- in another place or season -- or if you’re like my neighbors -- cool your heels (and other body parts) with A.C.  -- or have your own fan (and who knows—a word for how it goes)    how well a little (let’s not exaggerate and call it suffering) – discomfort pricks the mind to waking

not like this fan isn’t sucking up the same fossil goo as your A.C . but its very failings erect no interference to mental images of oiled pelicans -- while this afternoon in the cool chambers of a local coffee house I gave not a moment's thought to Tiny Tony and the uncapped rig or plumes or severed pipes – undisturbed -- grateful for relief -- at peace – no thought to dying crabs or whales as though it were the natural order that they die – to keep my armpits dry