Wall in my work space 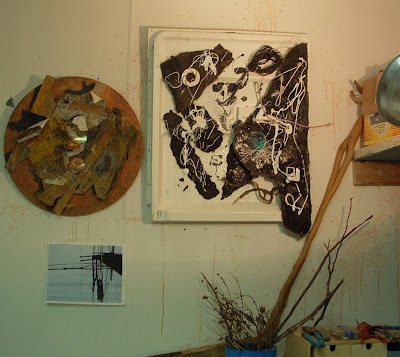 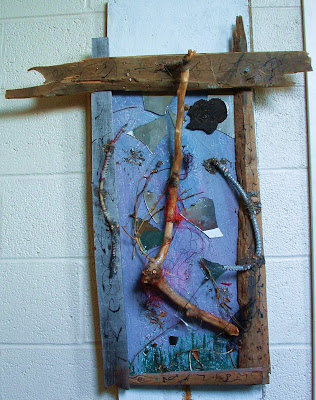 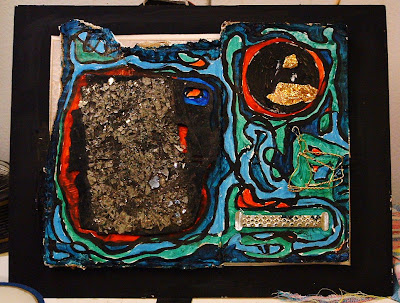 Pray for us Teddy in our hour of need 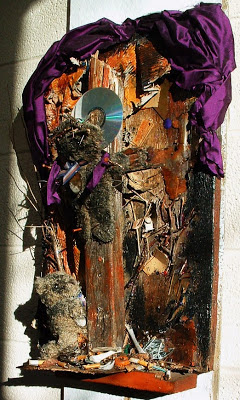 
This one, not that happy with... from a sketch I did at the El Bar. 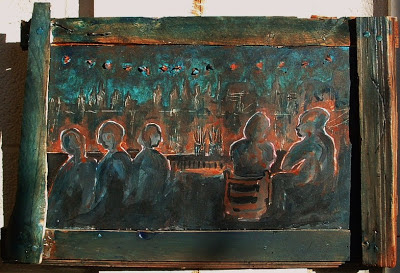 Language is not our friend


Writing poems again... and more convinced than ever that language is not our friend. Writing poetry is like... fighting the enemy from within. Somebodies gotta do it... I don't know where I am anymore... as if I ever did. Making poems, one can be seduced into thinking one is "saying something"... perhaps, useful, revolutionary, hopefully--destructive. All that may be true. And more... touching heart to heart is not a bad thing. Making visual "art" (stilll using the scare quotes) ... my own uselessness rises up and shouts at me, curses me... the reality is beyond rationalization or defense... certainly not, any defense I could put into WORDS... those lying parasites that eat away at life! See. see what is there, and what is not. See! Touch! Feel! Smell! Do! Make! ... and shut the fuck up 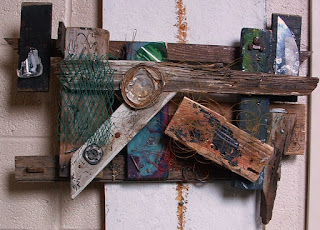 I love living in the Ox, even the crudeness appeals to me (cannot, absolutely cannot imagine ever again living in what passes as normal middle class comfort--not in this world) --but most of all, I love living with people, the ever-changing interaction. Nonetheless...

I'm increasingly concerned about how long this can go on. I have health issues. Would not last long on the street. Can't afford and don't WANT another apartment. So...

Are there two or three or 4 artists who would like to share living and studio space? Somewhere in this city? A kitchen, working toilet--outside light a plus. Don't need heat if enough closed off room for a space heater to be effective. I absolutely need space to work, and wall space to hang & store work. Creature comforts--beyond what it takes to survive without risk to health, unimportant.

To admit, one is an 'artist'


There were those who went to cathedrals… paged through hagiographies of the saints, and were possessed by the insatiable desire to become what they knew was impossibly beyond them. I went to art museums… The Art Institute of Chicago, Nelson-Atkins in Kansas City… from childhood… and books of reproductions… hagiographies of artists.

Then there was my mother—exquisitely gifted, penmanship, drawing, who told me: “Don’t ever be an artist! Artists are the most selfish people on earth! But if you are an artist… there’s nothing you can do to help yourself.” And my uncle… my mother’s brother… another prodigy, in his skills as a draftsman. Only 13 years older. We went on excursions together to draw and paint. They weren't the Saints I aspired to… I had aspirations beyond them… or my own poor talents. So I gave it up.

Not all at once. In bits and spurts. Art classes. Semesters majoring in art. A brief spurt of working at painting—rebuffed… by the founders of the Painted Bride! Where I read poetry at a reading when they were still on South Street—and primarily a gallery.

So to call myself an ‘artist’ is not unlike someone brought up in a religious tradition claiming he or she was a ‘saint.’ You compare yourself only with the greatest… and have to filter out all the contemporaries who taught them and worked with them and were, maybe now forgotten, but an indispensable part of what they became. You see that with poetry… all the arts. It’s the one’s most easily appropriated who last. Maybe, sometimes, the “best”.. but that idea of who is the ‘best,’ of who are the ‘saints’ … is all about, who best represents the unquestionable, current version of “Reality” …. whether aesthetic or political or… Not their fault, that they’ve been appropriated.

All art is free… forever, but its misrepresentations, its Ersatz incorporation—its iconization—which is what makes it into a commodity… makes it ‘for sale,’ … what most confuse with the thing itself… Not that different than with saints, is it? Their specialty is but a means to sell and use them. When to be a ‘saint’… or an artist… is within the grasp of everyone.

And so to be an artist… to become an artist… to admit to myself, that I was… that I am, an artist.. I had first to become a revolutionary. To admit that the ordinary was not my kingdom. That was how I found my wings. If I can say to myself now… without apologies, or scare-quotes, that…yes, I am an artist. It was because I first had to discover my revolutionary roots.

So may we all!

No Revolution, Without Art, Without Poetry! No Art, no Poetry—without Revolution! 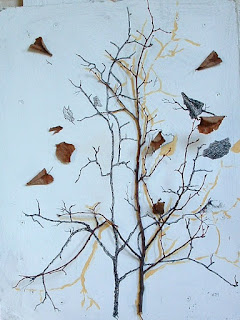 For those who are unaware a local Atlanta comrade is currently facing serious charges after being attacked on New Years Day. He is being held without bond. Solidarity and support are needed. Please spread the word and do whatever you can to help our friend and comrade.

It has been reported in the press that Luke O’Donovan, 19, went on a“stabbing rampage” at a New Year’s Eve party in Reynoldstown, a neighborhood in Atlanta, GA. This is not accurate.

The events that occurred were the result of Luke O’Donovan desperately defending himself against a clear act of queer-bashing that included Luke being stabbed in the back. Although the exact sequence of events is unknown at this point, it is clear that Luke was attacked by several people at one time and retaliated in self-defense in an attempt to escape the attack. Several witnesses have reported watching between 5 and 12 men mobbing up on Luke and stomping on his head and body with the intent to kill him.

The people who were stabbed during the conflict were not attempting to end the fight with Luke. The altercation was never limited to Luke and one other person, but involved several people mobbing up on him. The motivations of the attack on Luke seem to originate in the fact that he had been seen dancing with and kissing other men earlier at the party. Luke was repeatedly insulted with homophobic slurs throughout the night.The men who attacked Luke are known to have exhibited homophobic language and behavior in the past.

Luke was called a faggot during the fight. This provides clear evidence that the attack on Luke was in some way motivated by homophobia and perpetrated by multiple men while Luke was alone. Luke is currently the only person involved in the fight who is in jail.

For letters of support and books for Luke, his address is:

Many of you are inquiring about sending Leonard money to his commissary account.

US POSTAL* orders can be mailed to the following address:

What you CAN send them: Letters, postcards,
printed news articles, printed photos, magazines,
paperback books.
Any letters or printouts should be on regular
computer paper, not photo paper.
Limit 6 printed pages per envelope.
Include your return address on the letter
itself as they usually do not get to keep
the envelope.  You may include up
to 3 magazines in an envelope,
but I recommend no more than 1 book per package.

Full list of prohibited items available here:
http://www.cookcountysheriff.org/doc/doc_inmatemail.htm
NOTE: The jail will only censor violent or sexual material,
but the lawyers have asked us not to send any overtly political books/etc.

Bradley Manning
a) PFC Bradley Manning cannot receive any cash,
checks, or money orders. His legal team is responsible
for ensuring that Bradley has sufficient funds in his detainee
account to purchase items such as stamps,
envelopes, toothpaste, etc.
b) Photographs are only accepted if printed on copy paper.
A maximum of six (6) pages are allowed.
Pictures on photograph weight paper are not allowed.
c) Incoming mail will be returned to the sender if,
in the opinion of the confinement facility, falls into any of the
following categories: 1) Contains inflammatory material
or advocates escape, violence, disorder or assault;
2) Directly or indirectly threatens the security, safety or order of the facility;
3) Contains coded or otherwise undecipherable language that prevents
adequate review of the material; 4) Is received with “Postage Due”; or
5) Contains items of contraband (including anything of any
material value, including postage stamps or cigarettes).

If we act, it is no dream

Going over last year's expenses... appalled at what I've spent on art supplies. More than $800 since August--almost $700 of that in the last three months. A good example of cumulative consequences create a new reality. When I started putting together street stuff, it was pure play with no pretensions to 'art,' no anticipation of where it would take me. If I'd destroyed each piece as I made it, would have gone on like that. But the very physical reality--the accumulation of more and more objects, changed my relationship to what I was I doing, and no amount of resistance would have stopped that.
Where to put them? Many have fragile surfaces. I can't stack them like paintings or drawings. I've already run out of wall space with light. Have no place to put the free standing sculptural work. That I'm able to look back and see patterns and development, that too affects what I do, and how I think about my work. It generates desire... to do more, to avoid repetition--pushes me to explore and experiment conscious of what I've already done. Again--the accumulation of objects and expenses forces me to think about compensation (a difficult subject for me). I've been told there are people who might want to buy them... something absolutely unthinkable when I started doing this in August. But this means putting them on display... photographs, a portfolio, possibly looking for a gallery that would give them a showing. Way more complicated than sending out poems and MSS to publishers (maybe not more than turning them into books, but I've not been faced with that problem yet. The fact of DOING creates obligations... to the work, to my need to think through what it is I want from this. It's not a dream... it would be easier if it were... where nothing actually happens, nothing is required.