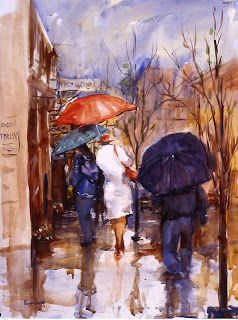 Manil Suri will be at the Free Library on the Parkway this evening. Last three times I tried to attend, the auditorium was filled. Seating only in the main lobby under the bronzed gaze of Dr. Pepper--watching on a giant TV.

Not for me. Turned around and went home.
[post reading: Suri impressive. Too tired to string words together last night, but will follow up after classes0

I'm not much for book signings, but I like to hear the authors read. Last time I managed to get there on time--a few years ago now--Richard Powers and Ken Kalfus. Powers read from The Year of Our Singing, and Kalfus from The Commissariat of Enlightenment. A memorable occasion/

I haven't read Suri's lastest, but The Death of Vishnu was one of my favorite reads in 2002. If I make it on time, I'll write about it when I get home.

Meanwhile, here's an image one of my sister's watercolors.
I'll add a list of West Coast galleries that carry her work when she sends them. She's one gutsy woman. All of 90 pounds, if that--in her forth month of chemo, post surgery for ovarian cancer: still painting and doing exhibitions.