First, an excellent FAQ on tornado safety and history

A News Film taken shortly after. The funnel shown is NOT the Ruskin Tornado. File footage. But the rest is.

4/28/2011 I watched in awe and horror the videos of the storms that hit so many places yesterday in the south... and those from Tuscaloosa over and over. I've never seen another that looked so much like the one I remember... it's size, the moments when the sun would light one side of it, the lightning that illuminated the center of the funnel (I was told I'd imagined this... that this isn't something that happened). My heart goes out to those lost, and those left without precious objects of memory and identity.

New members of our society of lifelong cloud watchers.

Scroll down for photo of aftermath, links and credits to photos.

If you were there, you are encouraged to add your memories to the comments below. There are other first hand accounts HERE and HERE

On the afternoon of May 20, 1957 I remember walking South on 109th Street, beside me, a class mate and next door neighbor, Larry Perkins. The street ends at the end of the block. We are at the crest of a long ridge--the "Heights" of Ruskin Heights. Below us, the football field, gymnasium and auditorium and the long brick class room corridors of Ruskin High School. Even now, I don't have to close my eyes to see the sky. I can feel the heat, the humidity.

I was 15. We had moved to Kansas City from Chicago in 1952. In one of my earliest memories, I was huddling in a storm cellar in Norman, Oklahoma where my father was stationed during the war. Cradled in my mother's arms. Tornado.. The beginning of a life long fascination with storms.

I was a voracious reader, loved books on animals, on science, and had a head full of ideas about tornadoes and how they formed and the conditions that spawned them--not all of it accurate, I'm afraid--but at 15, who would know? It was the perfect weather for these classic spring storms. In fact, before dark, there would be 51 recorded touchdowns. The Ruskin Heights F5 would be the strongest. I spent much of the late afternoon and evening outside watching the sky. I wanted to see what the real thing looked like. Hoped I might catch a glimpse of a hook dipping down from the back wall of an approaching super cell, a writhing, serpentine tail of cloud. The radio had predicted the possibility of severe storms. I was ready and waiting.

Where did we go, Larry and I?

No memory at all. Perhaps to the strip mall--the one where so many were caught when the super market roof fell in on them. But that was hours later. My next recollections leap forward--well after 7:00. There's been a sighting somewhere near or past the Olathe Navel Air Base. Our neighbors to the north, the Settles--J.B, was a reserve flier. Cougar jets--so the Olathe sighting brought it home. When you hear a place name on the radio that you know, that has emotional resonance--you pay attention.

My parents had gone shopping--driven to Sears with my younger sister, Peggy. I was alone in the house. I put the radio in the doorway so I could hear it and went back and forth, from front yard to back, watching the darkening sky to the south and west. Reports put the funnel, now confirmed, on a path headed directly toward us. Southwest. From my reading, I assumed all tornadoes came from the southwest. Trace my finger on a map... we were at the center of the bullseye.

Find a place of shelter on the opposite side--so I had read. That would be our garage. I took the digging forks and garden implements from the wall and put them in a large wooden tool chest. Not good to have pitch forks flying through the air, I thought. Gathered several blankets and lay them against the southwest wall of the garage, ready to wrap myself in at the last moment. Flying glass, I'd read, was a danger.

I had a Kodak Brownie camera. It was already dark for taking pictures--a great column of cumulonimbus clouds blocked the sun; I grabbed a chair and left my camera there. At the last minute I might get a shot of this thing. Those old Brownies--to take a time exposure, you had to hold the shutter switch down by hand. The chair was to keep the camera steady.

Memory: standing in the back yard. The first sighting. Neighbors to the east--pointing to the south. Nothing. Then lighting strikes would illuminate the thing... nothing like I'd imagined. No little hook dipping down out a cloud. No serpentine tail.... something immense, vast. Black at the base. A skirt of debris thrown up. And as it came closer--dropping out of the cloud wall, the sun low in the sky shown against it--like white whipped cream!

It was beautiful... and all the more awesome for its beauty. Forget Mount Blanc--if you want the Romantic Sublime, there it was!

A swirling column... that as it grew closer-- you had to turn your head to see one side and then the other--a straightforward glance wouldn't take in the whole of it... too close... ran to the front of the house for my last-chance snapshot... held down the shutter--when around the corner, there was my parent's car--doors flung open at they approached--voices calling to jump in.

But our dog! Our little honey colored cocker spaniel, Kitty (my dad liked Gun Smoke... )... I ran in the house, my mother's voice screaming at me to hurry, grabbed the dog, jumped in the car on the run. The tornado, by now a monster above us, the sound of it--not like a freight train, as I'd read... but something that seemed to well up from the very earth, the deepest organ notes--I thought of a recording we had of Albert Schweitzer playing Bach. In the Book of Job, this would have been the little finger of God.

At the south end of the block, a park... where most of the wreckage would later be buried. "Turn at a right angle!" I cried... remembering what I'd read. But my father at the wheel heard, turn right.

Directly into the path of the storm.

Behind us... and I'm not sure of this part of my recollection, there were two more cars--all of us going full accelerator, peeling away to out-race this thing, and then we were showered with debris, a clattering against the roof and windows, the car shaking--speeding into absolute blackness... and then it began to clear.. and we could see again, and we slowed down.

Behind us... no more cars. We never knew what became of them. 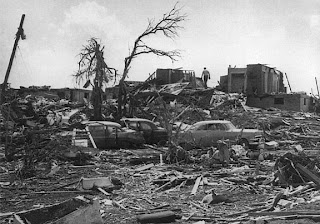 For hours, my father and I wandered through the ruins, following calls for help from those caught beneath the debris. People wandered like living dead, studded with roofing nails, bleeding and dazed. The sound of water gurgling out of severed pipes, the sweet smell of natural gas. It was not easy to find our own street, our house... which fared better than the Perkins' next door: nothing left but the concrete slab. (I attributed this to my having left all doors and windows open... the myth/theory of the day, that the sudden drop in pressure contributed to the destructive power of the wind) . Behind our house, to the east--devastation as far as you could see.

I close my eyes... 51 years and counting. And I see the sky, that wall of cloud. I still have dreams. But they have grown strange. It comes again and again. It has taken my parents, taken friends, lovers.. those who never came close to that storm. And soon enough, I know... It will come again for me.
---

Carolyn Glenn Brewer's book on the Ruskin Heights tornado: Caught in the Path>
Scroll down for photos.

NOAA : meteorlogical data, maps, graphs. Scroll down for photgraphs of the tornado in formation, and post-storm damage.